Thanks for joining us for Alumni Weekend 2022!

What a fun weekend we had! We celebrated reunions, the 50th Anniversary of Girls and Women, and our alumni community at large. The weekend was packed full of events, and we saw so many familiar faces. We're already looking forward to next year!

Few people have contributed as much to The Hun School as Danner Schmunk Riebe ’79. She arrived at Hun just four years after the first girls were admitted, and among her many academic accolades, was the second girl elected president of Student Council, in 1978. If student leadership wasn't enough, she was also a pioneer on the athletic fields, persuading the administration to create the first Hun School girls’ lacrosse team. After college, she returned to work in Hun’s Admission Office and coach lacrosse before leaving to raise her family abroad. After returning stateside, Head of School Jonathon Brougham called to ask Mrs. Reibe to serve on the Board of Trustees, of which she has been a member for seven years. Her admiration for the School and her commitment to giving back led her to establish the Schmunk Family Scholarship, to help other students gain access to the Hun experience.

“Promise me you will become a writer; God gives the gift to so few.”

These were the words Carol Arnold wrote on Kim McCreight’s ’90 first short story. Ms. McCreight saved her beloved Hun English teacher’s note and clung to it during her decade-long struggle to get her first book published.

Today, Ms. McCreight is a success by any definition. Her complicated mysteries have been nominated for the Edgar, Anthony, and Alex Awards. Each has been optioned for TV or film, including the most recent “Friends Like These,” which will be adapted for TV by Amblin Television and Ms. McCreight. “Reconstructing Amelia” has been optioned for TV by HBO, Nicole Kidman’s Blossom Films, and David E. Kelley. A TV adaptation of “A Good Marriage” is coming soon from Amazon and Nicole Kidman’s Blossom Film

While at Hun, Ms. McCreight ’90 was a resident student who served on student council, The Mall, and The Edgerstounian. After graduating from Hun, she attended Vassar College and The University of Pennsylvania. She has remained active as an alumna, most recently, she returned to her alma mater to teach four English classes.

Kelsey Tylus Testa ’05 attended The Hun School for four years, and was involved in varsity soccer, photography, and studio art. She went on to Franklin & Marshall College and then Rutgers Law School, where she focused her studies on Child Advocacy and Family Law. She currently works for Major League Baseball, negotiating consumer promotions contracts for the thirty MLB clubs and national and corporate partners. Mrs. Tylus Testa is a brain cancer survivor who captains Team Tylus Testa at Cycle for Survival for the past ten years.

Tyler Veth ’11 was a four-year rower who achieved the rank of Eagle Scout while a student at Hun. He graduated from George Washington University with a degree in business administration and international business. After graduation, he moved back home and eventually took on the role of vice president of his family business, building product distribution company Auxiliary Service, Inc.

Football and baseball player Thomas Sumners was a force on both fields: He was part of the School’s first championship football team since the 33 Club, and finished his senior baseball pitching season with a 6-1 record. He studied government and law at Lafayette College and then attended Rutgers Law School. In 2008, he was named New Jersey Superior Court Judge and in 2014, he was promoted to the Appellate Division. Mr. Sumners and his wife Nicole live in Lawrenceville, New Jersey and are the proud parents of three Hun graduates: Shawn PG ’95, Thomas, III ’10, and Taylor ’11.

Nina Tinari ’98, a resident student at Hun, played both soccer and lacrosse during her tenure. In her senior year, she was recruited to play both sports at Loyola University in Maryland, where she went on to focus on soccer and set scoring records her freshman year. Nina serves as president of T2 Consultants, a political and government relations consulting and communications firm. She lives in Philadelphia, Pennsylvania. and has been recognized as one of the city’s emerging female leaders.

Leo Stinson earned seven varsity letters during his career at The Hun School, in addition to the John R. Scott Memorial Award for his excellence in athletics, leadership, and school spirit. He went on to study engineering and economics at Lafayette College, where he was a member of the lacrosse and basketball teams and maintained a GPA above 3.4. Leo received his MBA from George Washington University and is currently Head of Balance Sheet Risk for Capital One. He lives in Great Falls, Va. with his wife Megan and sons Leo and Ford.

The undefeated Women’s Varsity LightWeight Four, The Spirit of ’95, was initially composed of Melissa Christine Stevens '95, Jill Espaillat Quintero '95, and Christina Krauthamer '95. During their senior season, Alison Kale Emery '96 and Erica Chawla Negi '98 joined the boat and Athletic Director Bill Quirk took over as their coach. They were undefeated during the season, and went on to win NJ Garden State, the City Cup of Philadelphia, the Stotesbury Regatta, and Nationals.

“We belonged to the water we rowed upon, to the oars that propelled us, to the currents that acted as friend or foe.” – Christina Krauthamer '95 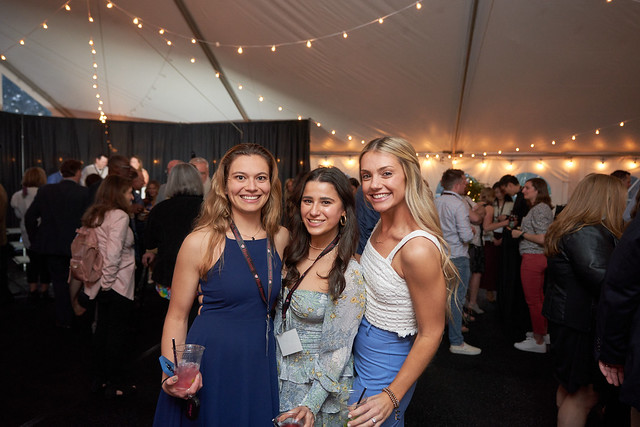