On Wednesday, November 17, The Hun School welcomed Freestyle Love Supreme Academy to campus as part of the School’s Centennial Speaker Series and Her at Hun: Celebrating 50 Years of Girls and Women. The outdoor performance was high-energy, interactive, and carried a message of positivity and inclusivity.

Freestyle Love Supreme was conceived by Lin-Manuel Miranda, Thomas Kail, and Anthony Veneziale. The group is currently performing on Broadway and are the subject of a Grammy Award-winning documentary on Hulu. FLS Academy are talented members of the cast who spin cues from the audience into humorous bits, instantaneous songs, and fully realized musical numbers. From singing to rapping to beat-boxing with harmonies and freestyle flow, each and every show is unique to their audience.

During the performances, Hun students were just as much a part of the show as FLS Academy, and along the way, there was no shortage of participation. Prior to the performance, each student wrote down one word, any word, and put it into a bucket to be used in the performance. The artists then pulled from the bucket and used the words to fuel their freestyle flow. In another act, students with a passion for beatboxing emerged from the crowd for one-on-one beatboxing lessons from cast members including two-time World-Champion Beatboxer Kaila Mullady.

FLS Academy looked to the crowd of students for inspiration for two of their bits: “pet peeves'' and “things we love”; the four artists wandered throughout the crowd randomly collecting words from students to use as the topic of their raps. After a student tossed out the word health for their “things we love” act, FLS Academy finished the show with an impromptu freestyle rap song about the importance of taking care of one's mental health.

Sasha Moise ’23, notes that FLS Academy was one of the best performances she has witnessed during her time as a Hun student.

“I was captivated from the moment they started,” she said. “Hearing the amazing piano layered with the beatboxing and the rapping on top of that was just such a fun and exciting experience. I also really appreciated how authentic the performers were. From the little time we had with them we got to learn a little bit about each of them and hear their stories and why they do what they do. It was a performance I will never forget.”

After the show, the Middle School improv club and the Upper School Janus Players joined the performers for a lunch and open forum discussion. Students were able to get some tips and tricks from the FLS Academy members on how to be a successful improv artist, as well as learned some valuable lessons on the importance of being present while performing and connecting with cast members to enhance a show. 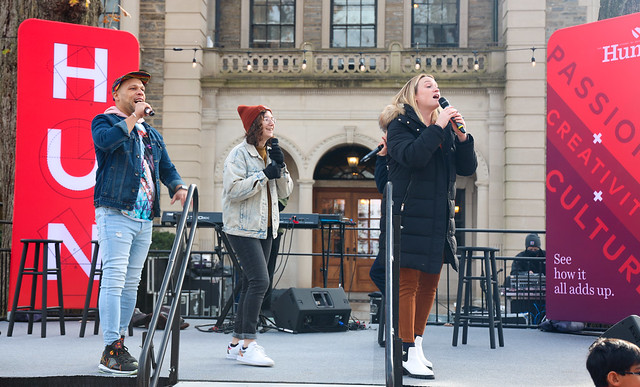