The Hun Middle School celebrated its 2020 Closing Exercises on Tuesday, September 8th. The forty-nine members of the eighth grade class reunited for their graduation more than three months after it was originally scheduled due to Covid-19, and only mere hours before their freshmen orientation activities.

Rather than hosting a virtual ceremony in the spring, the School’s administration delayed the event in hopes of an in-person ceremony and reunion this fall. “This was an important day for students and for teachers,” says Ken Weinstein, head of Middle School, of the September 8th event. “We missed them so much and they missed each other. While there was physical distance between us all, you could feel the closeness in our community.”

The ceremony, which took place on the Natale Family Field, began with a welcome from Head of School Jonathan Brougham before Mr. Weinstein took to the podium. Mr. Weinstein thanked the faculty for their tireless efforts and congratulated the students on their achievements. “I have found you to be exceptionally outgoing and outward-thinking, concerned with each other, concerned about your families, willing to help one another, and focused on your world outside of Hun in an unusual way,” Mr. Weinstein said. “I am positive you are the most empathetic class I’ve ever worked with.”

Student Speaker Anthony Chiarello '24 spoke about the importance of stepping outside of your  comfort zone. “As students, we are always told to step out of our comfort zone and try new things but what really is your comfort zone? Is it where you feel safe; something you know you won't fail at?” he asked. “You only grow when you are outside your comfort zone,” he answered. “You grow as a person, by learning new things, and you learn ways to tackle obstacles that stand in your way.”

He challenged his fellow classmates to do this by connecting with new people. “Class of 2024, we’re going into freshman year and that means a lot of new people. I ask you to do one simple thing: go up and talk to two people, two people you don’t know. Step out of your comfort zone and go meet someone.”

Anthony’s anecdotes of overcoming his own fears during challenging mountain bike adventures and at the annual Middle School trip to Camp Bernie, further illustrated his message. “There was something about [the challenges at Camp Bernie] that showed me, stepping out of your comfort zone, getting to a point where things are scary, is a good thing. The next time you find yourself thinking, ‘I don’t know if I can do this, try and do it. Step outside of that space where you feel safe and try new things.’”

The graduates were seated with their individual families and all attendees were masked, but it did not overshadow the joy of the day. As is tradition in the Middle School, each faculty member presented an award for their discipline, followed by the conferment of five graduation awards. Each graduate was then called by name and invited to collect their Middle School diploma.

The following students were recognized for their individual achievements during the presentation of awards. 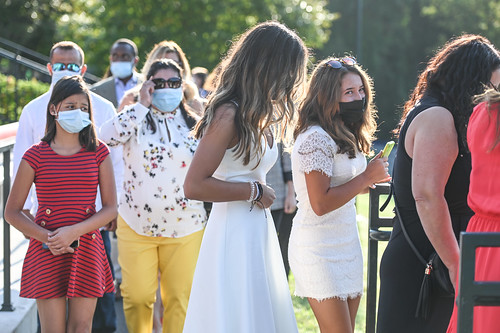